Ok, so we have mentioned in previous posts how much we love the warm weather and how sad we are to see it go, but come on ladies and gents, we just have to embrace the colder weather and look at the following positive reasons as to why the season of tights (A.K.A autumn and winter) proves to be awesome: 1. Say goodbye to shaving your legs! If you are having a lazy week that’s fine. Tights will cover the existing thermal layer you’re growing! 2. If you wish to... Read More 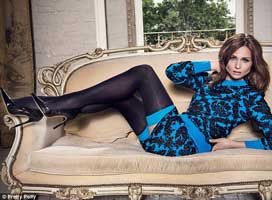 Next to step into the tights (we mean shoes but couldn’t resist the pun) of the new face of Pretty Polly is no other than the stunning musician, Sophie Ellis-Bextor. With hits including ‘Murder on the Dance Floor’, ‘Bittersweet’, ‘Young Blood’ and re-makes such as ‘Yes Sir I can Boogie’, Mademoiselle EB began her singing career as lead vocalist of an Indie Rock band during the late 90’s. Her first solo album in 2001 reached number 2 in the UK charts and was awarded a double platinum. Success for this... Read More